What do Gordie Howe, Art Linkletter and Joni Mitchell all have in common?

They were all born in Saskatchewan, you know, "The province that is down to earth, but where the sky's the limit." Saskatchewan covers 6.5% of Canada, an area of 651,036 square kilometers. As of the 2001 census, Saskatchewan's population was at 978,933. Seven years later, I estimate the population has grown to 978,945.

About 95% of all goods produced in the province directly depend on its basic resources (grains, livestock, oil and gas, potash, uranium and wood, and their refined products). Which brings us to our Short of the Week, Potash Corp. of Saskatchewan, Inc - POT. 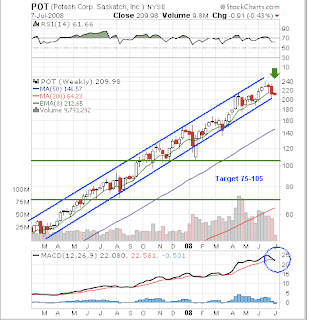 The down arrow on the above weekly chart will not become effective until POT closes the week under the lower blue channel line. As you can see, it's not going to take much, in fact any close under 200 for the week would likely seal POT's fate for the rest of the summer.

Q: Hey Allan, what about using the daily chart for intra-week entries?

A: Alrighty then, let's take a look at the POT daily chart: 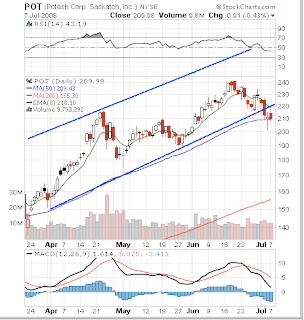 We can see here on the daily chart that POT has already dropped out of a three month channel and is sitting right upon it's 50 day moving average. This is good; the moving average will either provide price support, or, momentum arising from the break of the channel will overpower whatever support there is from the moving average and POT will begin a cascade lower.

If you pull up a quote of POT on Yahoo Finance, this is what you will see right under the quote: 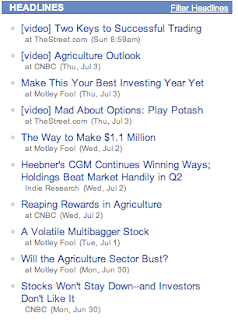 Story after story exhorting the benefits of owning POT, including a plug from our least favorite curmudgeon on the planet, Jim Cramer. Enough said?

The Trade: POT is setting up for a short, or is already set up for a short, depending whether on a daily or weekly chart. In either case, a drop from current levels, 209-210 to under 200 will confirm a weekly trend line break and suggest a significant drop in price.

WARNING: Although options can be scary good, they can also be scary bad.

(More about romance in future blogs.)

I've been waiting for a chance to short this one, as I think a huge fall is inevitable. Starting to see some cracks here, for sure.

Allan,have you purchased the puts on POT yet? I noticed the price did dip below 200 this morning.
Ron

Allan,this trade makes a lot of sense.I purchased 2 Dec. 110 puts.Thanks for the heads up.
Ron

Oops...bullish engulfing pattern on the daily on higher volume. Maybe a fakeout before the fall

Are you still in this one Alan?

getting ready to turn down now...

horrible looking chart heading into earnings tomorrow. Allan - thanks for bringing this one up.