This is a quick follow-up to the CLNE post here. T. Boone Pickens will be on TV this weekend with his ads and a special appearance in Fox News Sunday.

Meanwhile, the daily TA charts for CLNE are shaping up for a short-term move, at least 25% to the 15-16 area and maybe a lot higher. 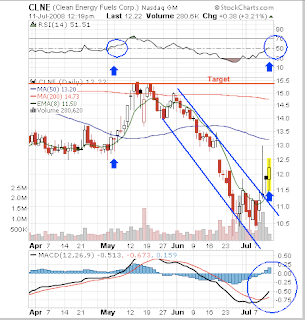 With the market down over 200 points mid-day today, CLNE is up about 3%. Energy is beginning to look like a major election issue and Pickens' Plan seems to be gaining widespread attention on it's way to widespread acceptance. Owning a piece of the action, CLNE, might at least make the next few months of political postering by both sides a lot more interesting. As I wrote in the first blog, investing along side T. Boone has always worked out for me.

July 15 calls are 10 cents...a stretch but what a return may be possible

Nothing like "drilling" a great story into the public's psyche when everyone is all ears from pain at the pump.

Unknown said...
This comment has been removed by the author.
1:10 PM