I just now sent out my Weekend Update to subscribers.  Here is how it begins: 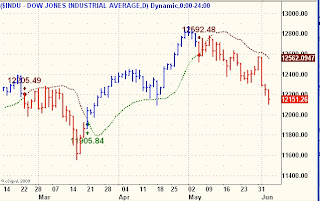 I banged the drum loudly a few months ago when I introduced the new DJIA trading algorithm, one of the best trading indicators that has come across my screen in decades. It’s first real time signal was a SELL on May 5th @ 12584  generating about a 400 point gain (so far) in less then a month,  for about a 3.2% win. The leveraged equivalent of being short the DJIA is DXD and as would be expected, it rose 6% during the same time period.  For option players, a 3% move in one month on the DJIA was easily a 100% move in puts.
In summary, our first DJIA trade has generated returns of +3%; +6%; +100%………
IF YOU ACTED ON THE SIGNAL
If you scroll through the attached Trend Tables you will see a bevy a similarly situated trades.  Successful directional signals for indices, commodities (hey, how about the Sell signal on SLV, a gain of 16% unleveraged in a month!) stocks and gold shares.  The signals are there, the algorithm is doing his/her/its job. We found something that works, but its you who has to trade it.
This week there is one new signal.........
......and this where the free preview must end, its only fair to those who are paying for the service.  You can become of them @ AllanTrends.
Posted by A at 8:24 AM

Checking In from New Orleans. Its been awhile.

Has Allan's algorithm properly positioned you for the decline? I think so.

We may be the early birds to the equity-commodity correction. Lets see: