NHL Playoffs and the DOW 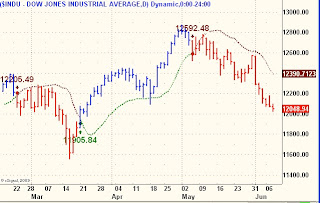 '
Onto the NHL Playoffs.  Vancouver and Boston are in the midst of a tight series to see which team plays the Detroit Red Wings for the Stanley Cup.  One of the Bruin players, Nathan Horton was knocked out the playoffs by a pretty vicious late hit by Canuck Aaron Rome.  You can see the hit here.  Rome was suspended for the four games, essentially putting him out of the series.

A couple of Allan points:

(1) During the regular season, the hit may or may not have resulted in a suspension, worse ones during the season did not, or if so, the suspension would be one game, two at the most;

(2) My suggestion for years has been if any player commits an infraction that results in injury to another player so as to cause the injured player to miss any games, then the player causing the injury must also miss a like number of games.  Yes, that means  if an illegal hit ends the career of one player, it ends the career of both.

How about that DJIA chart?