No, I'm not talking about the kind of depression that comes from getting kicked in the side of your head by an old girlfriend. This kind is an economic depression, brought about by, well, by what?

How about social mood? Here is a chart reproduced from Google's Preview of Robert Prechter's 2002 treatise, Conquer the Crash. 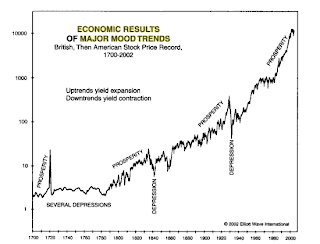 From Conquer the Crash :

"Major stock market declines lead to lead directly to depressions. Figure 2-1 [above] displays the entire available history of aggregate English and American stock price records, which go back over 300 years. It shows that depression has accompanied every stock market decline that is deep enough to stand out on the long term graph. There are three such declines, which occurred from 1700 to 1784, 1835 to 1842 and 1929 to 1932."

Notice how the 1987 stock market crash does not stand out on this chart. Unlike the wise counsel of Warren Buffett and the CNBC cheerleaders, this is no 1987 whereby the sooner one bought back into the market, the better the ultimate profits gleaned from the fervent bull market of the 1990's.

THIS TIME IS DIFFERENT!
Back in the late 1970's I was a wet behind the ears attorney in Atlanta with a strong addiction to the stock market. It wasn't long before I discovered another young addict, Robert Prechter, just up the road in Gainesville, Ga. He was my first (of many) market gurus, introducing me to a novel form of technical analysis deemed, The Elliott Wave Principle. Using Prechter's book and his thrice a week telephone updates, I made my first small fortune in the stock market.

After the 1987 crash Prechter got out of the market and he handed his short term advisory service over to a succession of less competent advisers. Before the current guy, Steven Hochberg came on board, I was long gone as a subscriber and as a Wave student. It wasn't until Prechter's greatest accomplishment (in my opinion), his 1999 book, The Wave Principle of Human Social Behavior and the New Science of Socionomics
did I return to the fold, this time not so much as a way to trade stocks, but as a way to understand life, society and economics.

As I read over the Internet this Saturday in October, 2008, I can't help but be amused by the near total obsession with getting in the market at "the lows" "the bottom" "the turn of the screw". By order of no one else but the Emperor Warren himself, the market has been commanded to stop it's decline and soar to new heights. Everyone is pointing to previous lows in the great bull market of the 20th century as their example from which they are taking their current marching orders. In the likely face of an economic depression, I don't think so.

"Stocks are not registering a Supercycle top like that of 1929 but a Grand Supercycle top....That means that the ultimate---if not the immediate---consequences will be more severe and more confounding than the consequences of the 1929-32 crash. As Chapter 5 of At The Crest of the Tidal Wave explains, the entirety of the Grand Supercycle wave IV should last a century and comprise two or three major bear markets with one or two intervening bull markets." 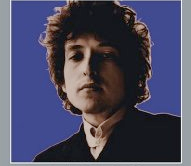 Its coincidental that I read this post after watching a very interesting video on the topic just a couple of hours ago. This video from the Socioeconomics Institute discusses the interrelation between the markets, cycles and how they relate to social mood. TIes into the video is Prechter, Fibonnaci and Elliot Wave and how these emotional cycles drive the markets.

Its very interesting if you have an hor to spare. Here is the link http://tinyurl.com/658mtf

Can't say how any of this will play out but the Dow did show an O'Neill "followthrough day" on Thursday highly correlated with intermediate term market bottoms. Hard to know for sure but history says we're going up a bit.

The only problem would be if Government overstepped once again by preventing shorting of ANY stock to stop such collapse... which unfortunately is not that far fetched.

Anyhow, do you have any favorite UltraShort ETFs?

You are a big fan of Jim Rogers'. His favourite saying is:

"IT IS NEVER DIFFERENT THIS TIME."

Allan, what if your are wrong? Its kinda difficult being open minded if you are married to your idea of SuperCycle etc

I found this to be an interesting read:

This supports the 7-9k near-term bottom prediction you made earlier (they predict 7200). The write-up does not talk about the possibility of breaking below the consolidation range. I do find it interesting, tho, that the one time a secular bear market DID overshoot a prior consolidation range was during the Great Depression. If that is getting ready to happen again then we really ARE in deep doo-doo.

Bo Prechter issued a statement today indicating the market and economy have bottomed out.

Are you no longer a disciple of his I presume?

Nonsense, no such statement was made by Precther, although Glenn Neely has turned off the dire scenario and is expecting a rally here.

I am sure you will letus know when you have started nibbling long...commodities seem to be the first place to start.

I really should write up a new blog on it, but I am so tired, so very tired.

I agree completely. There is only ONE way out and we all have a say:

Want your taxes down? Want the economy restored? want us to succeed in Iraq? Want America to be the centerpiece of the world?

WANT YOUR 401(k) to be fully restored from this mess (and then some)?

Once choice fixes it all:

BTW, Allan lives in McCain's home state, that is no accident. If you like Allan, go with John & Sarah.

The next four years will be the worst possible economic conditions imaginable, so perverse logic agrees with you, if you like Obama, vote of McCain and let him get stuck with the depression.