I don't often venture into the minefield of politics, but last night I caught Jay Leno and one of his guests, John McCain. Leno asks McCain how many houses he owned. McCain answers with a story about how he had been in prison for five years. I couldn't believe it! Why isn't the press all over this today?

One candidate for the presidency has the experience of a turnip, the other one is an ex-con. I mean the guy can't own a gun, can't sit on a jury and can't even vote, but he's running for President? I can't wait for the Republican spin on this one.

Speaking of which, if you want to day-trade the election in November, here is a site that allows you to place your bets: 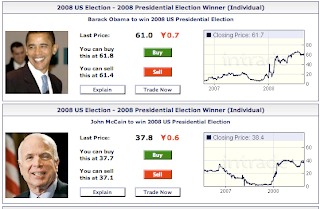 From the looks of things, news of McCain's stint in jail has already effected the odds.

Excellent Blog - I have learned a lot!

John McCain was a prisoner
of war in the Vietnam War so
he is not a felon so he can vote,
own a gun, sit on a jury, be
a US Senator, and run for President.

Allan, When and where was McCain imprisoned in the US?

Love your blog, but stick to investing and family.

Love your blog, but stick to investing and family.

i thought you were intelligent

Superb! Keep up the political blog.


As for the Republicans attacking Obama- rememer, "they" are use to
being whipped

You cannot do a political blog without giving due praise to the greatest president/statesman of our time:

Allan: FIX THIS. Put up a pro Clinton post and tie it to the explosion of wealth created in the stock market during his tenure. ALL HAIL BILL CLINTON.

He can't answer the question about how many houses he owns because they are all owned by his wife. A toast to all those wives who have all the money.

We will have NO further humor! ;^)

Actually you should thank Mr. Greenspan for the "wealth" that came from the Clinton era.

Oh yea, and also thank him for todays mess!

And be sure to pick up a copy of his book while you are at it! A stark contrast from his 1960's work titled "Gold and Economic Freedom". Amazing what a little power can do to a person!