MDII was brought to my attention by a long-time reader of this Blog. In his own words,

"I have followed this one for years. It makes powerful upside moves of 3-4 months, followed by a 17-19 month retrace/bear phase.

"We just ended one of those retrace periods and are starting a move that should take us to 2-3."

I pulled up the chart and it is a doozy: 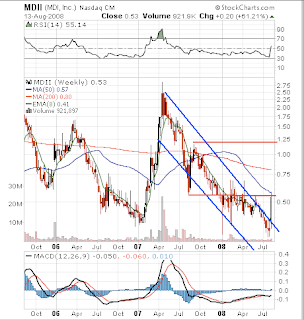 What I see above is that Wednesday's high volume breakout stopped right at one year long resistance at about 55 cents. Any follow-through in the days ahead, i.e. a close above resistance, would suggest MDII is going to between the 200 week moving average at about 80 cents, and secondary resistance at about $1.25.

Here's the deal: I do not have time to do my usual due diligence on the fundamental side. (I am in the midst of moving my daughter to Tucson to start her Freshman year at the University of Arizona). So my decision is whether to hang onto this idea until later next week when I can take a long look at this company, or, publish the idea now and leave it up to my readers to check this stock out. Because MDII could be at $1.00 in a week, I decided to go with it now, along with the caveat that THIS IS A SPECULATIVE IDEA, ONE THAT I HAVE NOT FULLY VETTED.

Don't you absolutely HATE that word, "Vetted"? The only Vette I know of is a two-seater Chevrolet sports car made by General Motors, one that makes the whole idea of being "Vetted" an erotically pleasing experience. But I digress.

You are all on your own on this one.

I bought MDII at the Open today, am up 10% already, but the real move is still ahead. It has been trading between 59 and 64 all morning, a break above 64 (or below 59) will be significant.