Back on July 9th I suggested CLNE as a bet on Boone Pickens and his budding media onslaught promoting his alternative energy plan.

At the time of that post, CLNE was trading at $12.75. As of last Friday's close, CLNE is trading at $17.25, a gain of $4.50, or 35% in about 35 trading days, 1% per day, 20% per month and 240% annualized. That is the power of confirmatory analysis, triangles trading, chart analysis or any combination thereof. As a business decision, you can afford multiple 3-5% losses on other trading ideas and still come out ahead on one big winner.

Did you get it? Let me repeat, you don't have to win on every trade as long as you take every trade, because if your underlying system is just 50% accurate, a toss of a coin accuracy, as long as you cut your losses and let profits run, you too can trade for a living.

What about CLNE now? The fundamental story is still intact, only more so. Pickens' Plan is gaining traction and the price action behind CLNE is adding credibility to the story.

What about the technicals? 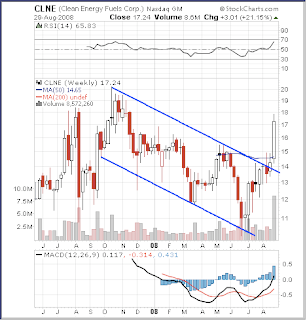 The Weekly CLNE chart looks great, with some resistance up around $20, about 20% above current prices.

The Daily chart reveals a clear breakout above two longer-term trend lines. But look at the volume bars at the bottom right of this chart. Huge buying volume coming in last week. This is good, no? 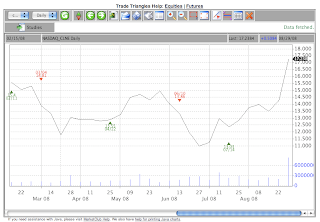 Well, the Triangles think so. By their very nature, the trade triangles catch every big move and it usually pays to be on the same side of the trade as the triangles.

Ask yourself this: How many times in your investing life would you have gotten filthy rich if only you bought strength in a stock with a great story behind it? Amgen, Genenetech, Microsoft, Qualcomm, Rambus, Research in Motion, Nanoviricides, Google, Apple, shall I go on?

I am not suggesting that CLNE is going up 2,000% from here, although it might. Only that everything that looked good about this stock in early July looks as good if not better now.

If you want to wait for a new name, you know that one will get posted here sooner rather then later (ask yourself: what does he know that he's not telling us?). That's not to say CLNE won't outperform anything else that gets posted here, or posted anywhere else in the coming week.

It's never easy, but more often then not, it's very rewarding.

Thats almost fine Mr. Allan
Though i was preparing myself to get ready for any break out you mention here but it seems with clne
the breakout already passed few days ago. Now, in what u already described should i consider clne
as good for a long trade? what is the target price in this case?
regards
quintilien

Allan - what's your take on CLNE at its current price, would you buy or hold?

good time Allan,
i'm reverting back to clne
today it is at its 52 ma
woulu u consider it as a good take?
infact, i would but surprised to see it at navilliers portfolio grading F
anything commented by you should be very appreciated
serge

serge - CLNE will be a great stock, eventually. But right now the market as a whole carries such downside risk that it overpowers all other considerations for me. If you want to bite, have an exit strategy, i.e Trade Triangles, or a Stop.