Here is an updated Weekly chart of the SPX, through Thursday's close: 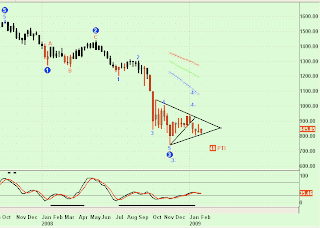 There are two wedges drawn on the chart. The first wedge was broken to the downside three weeks ago. That break led to a drop of close to 100 points on the SPX. Prices have been flirting with the second wedge this week, just barely touching the bottom trend line Wednesday and bouncing weakly off of it Thursday. Meanwhile, the False Bar Stochastic oscillator is signaling that down-trend is in place.

The significance here is that a break of the wedge to the downside should lead to another fast 100+ point decline. It can happen at any time, tomorrow, next Monday, a week from next Monday. Until it happens, prices can play all they want inside the wedge. Frustrating if you are short, but as we saw three weeks ago, patience now will be well rewarded upon the break.

Question of the Day

Dave said...
Allan:
Since I discovered your blog almost a year ago, I have been awestruck by your accuracy and refreshed by your candor. I also know that you would be the first to say that if you were right only half of the time that you would still be ahead. That said, is it possible that the EW model has no way of factoring-in the extreme differences in today's scenario? Is it possible for the herd to behave in an unpredictable manner this time? Wondering minds and all that...
Respectfully,
Dave

Where I suppose it is possible, it is not very likely. More probable is that I screwed up the application of theory to facts, thus arrived at an incorrect conclusion. That said, even that is not very probable since the two eminent EW authorities, Glenn Neely and Robert Prechter are in agreement with me that we are going lower, a lot lower.

I'm not sure how the cash market held up today but futures remained one tick ($12.50) below the previous high, pointedly *not* invaliding any wave patterns.

I see a couple possibilities from where we sit (on involves a move to 887) but wave 3 down remains valid until it isn't.

This is one reason why my last trade in this market was from the long side and when that was a loser, I backed away from this market.

The market is still acting like it is in a correction.

Looking at the the daily and weekly chart, and with SPX at about the same price it was 3 months ago, you can make the case the market is still in a wave 4 and just chopping around.

If it is still in 4 and is putting in a wedge or triangle, it will run off an a-b-c-d-e and then 5 down will start. That will take weeks.

I'm not betting on that, playing the market from the long side again, but I'll consider selling it there, anticipating the start of (3) of 5 down.

Allan, could you recommend some picks, I sold my stocks at a loss recently and am trying to recoup.

The problem I'm having with my analysis is it is an art.

Judging and interpreting the charts opens me and everyone else who is not using a mechancial system for bias from what we are seeing and hearing on TV, whether we realize it or not.

The economic news is all so bad on TV and in the papers.

Looking at the chart, though, the SPX/ Dow is at the price it was about 3 months ago, and generally moving sideways.

How do you explain the tone of bad economic news and yet the market is not falling?

There is another factor in there. Myself, I think the goverment is holding things up, by printing money, buying stocks and borrowing and spending.

If all a person was doing was looking at CNBC and focusing on the economic news, he'd be short all the time. No doubt.

That is one of the problems of trading the stock market with a system that is art, not a mechnical system. There is so much reporting on stocks, that bias gets through to how I interpret the charts.

There isn't that problem with commodities like cattle or lumber, because there is no reporting on those markets, hence the news bias is non-existant.

How's our NNVC baby progressing? I'm reading a fair amount of impatience on the message boards...the sky is falling...any potential funding has dried up...the tests being run are not proving out the viral eliminating technology, etc.

As always, your comments and insights are MUCH appreciated.
Mike

"That is one of the problems of trading the stock market with a system that is art, not a mechanical system."

I have most of my money in a fully automated futures trading portfolio and it is in a 30%+ draw-down right now. Don't start thinking that mechanical is some sort of panacea. The draw-downs in mechanical systems can outlast your account, in many cases.

My EW trading has been more consistent so far, by a good margin. Sure, I'm short during this silly up move but I learned early on in my trading career to not take counter-trend trades.

Mike: I wish the whiners would just sell their shares and go away. I would gladly suffer a 25% draw-down in my shares just to be rid of the weak hands who do not appreciate what they have in NNVC. It's a shame they will benefit from what is coming down the pike.

Allan, I truly get your art, (whoops) I meant to say your arts, hmmm sticky keyboard, what I really am trying to type is "your CHarts." Thank you for all the years you have published this wonderful "free" blog. Joe/NYC

We have been going up for a while and the short sellers on the SPX have been whacked to pieces.

Just admit that you are wrong and move forward. You are hanging on to this short idea and it it not working and not working in a big way. Arguing and whether we are in a wave 8 or 9 or such nonsense is not relevant.

My point is, one that only follows strong trends (the systems I found that worked the best) are not in this market now, unless they are very long-term systems.

I don't think the average joe is buying this market, or the weak holders are holding it up. Rather, I think the government is holding in up directly and indirectly.

Indirectly by borrowing a ton and spending it, printing all sorts of money and huge stimulus packages.

Directly, I wouldn't be surprised if it is buying futures when the SP is down. Think about yesterday, we had terrible news in the morning and the market was down 100+. For no good reason the market sky-rocketed up in a big way. Why?

I don't believe anyone mis-applied the theory. If this was a free market, likely it would be at 3,500 to 6,000 as EWT has predicted.

I just think with a big big player like that buying dips, likely the theory is going to have challenges.

Instead of it being a big flush out like you'd have in a free market, it is going to be a long drawn out decline like we had in Japan in the 1990's. Since Oct it has been the latter.

Conrad wrote: We have been going up for a while and the short sellers on the SPX have been whacked to pieces.

The shorts getting wacked are only those shorts who have been selling low.

The SPX is either in a downtrend or trading sideways. In that case, which strategy works in both cases? Sell high/ sell resistance.

Mike has been doing that, and I would bet his positions are all in the black. His strategy of getting short against resistance will be profitable if it turns out the market is trending down or in a range. The only time he'll lose money is if the market is in an uptrend, which is a low probability at this point.

I think you can sell SPX and make money, but you have to be selling resistance.

If you sell a break of what you think is support, likely, the market will be back in your face as Uncle Sam jumps in and everyone runs to cover.

"You are hanging on to this short idea and it it not working and not working in a big way."

We're down 100 S&P points from the last high at 943. At $50/point per contract on futures, I'd say that shorting is working just fine.

I keep my retirement account short all of the time due to the 3-day rule but I jump in and out in my trading accounts. Short the highs.

"For no good reason the market sky-rocketed up in a big way. Why? "

It went up a lot further than I expected but we did complete a wave 5. An A-wave I was expecting, but a 99.9% retrace was government rumor spreading (mark-to-market). I got out at 819.25, so I did okay on that one.

You've got the right strategy and were one of the first to realize selling high was the way to make money in this market.

A question for all of you, how do you explain a bad employment report, and it being worse than expected, and Dow futures are now up 36 points since that news came out?

The answer, in my opinion, is you have a big buyer under the market.

Whether it is Uncle Sam or someone else, they are buying stocks when the Dow drops below 8,000. The market has found buyers there 3 times now.

My point is, this isn't a free trading market, but a controlled one, and you need to adjust your strategy accordingly.

Mike already made the adjustment and is only selling high. I've joined that approach too.

What we're seeing here is an inverse correlation deflection with a ventricular effect....just kidding.
Alex, your assessment is very interesting. It still leads me to believe that somewhere around 900, we all should be short something. My SDS target is still $70, although I may step in around $71-$73.

Nothing that a good antacid couldn't cure. :D

Up another 215 or so today after my earlier pre- market post. When the market was flat. My 500 SPX calls are doing great.

Throw in the towel and go long. Otherwise you are following each other into financial ruin.

Cramer, BTW has been long for a while.

>Throw in the towel and go long.

Cramer? You can't be serious.

I predicted this up-move using Elliot wave--it overshot but 10 S&P points but up is up.

I'm not sure where you guys get the impression that we're always short. We'll see how the market does Mon-Tues. Today's C-wave up exceeded the typical target.